The Episcopal Diocese of Virginia, one of the largest in the Episcopal Church, was organized in 1785, and includes 38 counties in central and northern Virginia.

The Holy Communion was first celebrated on what is now American soil at James Towne (Jamestown) in 1607, and the (Anglican) Church of Virginia continued as the established church until the Revolution. On the day after the Colony of Virginia declared its independence from England, the Virginia Convention which governed both the Commonwealth and the Church of Virginia, ordered that prayers for the King and Realm of England be removed from its Book of Common Prayer. Most of the clergy took oaths of allegiance to the new Commonwealth, and a significant number of them bore arms in the Revolution, whose great Virginia leaders were parishioners of the Church of Virginia. Only Connecticut (1784), New York (1787) and Pennsylvania (1787) preceded Virginia (1790) in securing the consecration of a bishop. The Diocese of Virginia is proud to be the direct descendant of the first Anglican parish in what is now the United States of America.

Empowered by the Holy Spirit, our vision as Daughters of the King® is to know Jesus Christ, to make Him known to others, and to become reflections of God’s love throughout the world.

If you are interested in becoming a Daughter, or would just like more information, please contact The Diocesan Assembly of Virginia. We would love you to explore the possibility of a Chapter at your parish! 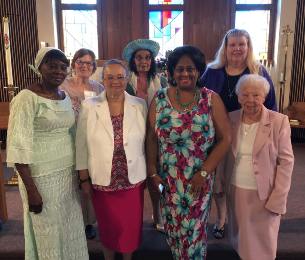